The Changing Landscape of Research and Development Innovation, Drivers of Change, and Evolution of Clinical Trial Productivity

The research included in this report was undertaken independently by the IQVIA Institute for Human Data Science as a public service, without industry or government funding. None of the analytics in this report are derived from proprietary sponsor trial information but are instead based on proprietary IQVIA databases and/or third-party information.

In 2018, 59 new active substances (NAS) were approved and launched in the United States of which 27% are new therapies to treat cancer and its symptoms and 20% are for the treatment of infectious diseases. Translating a scientific breakthrough to the development of a therapeutic medicine remains a slow process, with the 2018 cohort of NASs taking a median of 13.6 years from the time of first patent filing to launch. The companies bringing these drugs to the market are changing, with the role of emerging biopharma (EBP) companies growing. EBP companies patented almost two-thirds of new drugs launched in 2018 and registered 47% of them, while large pharma companies patented only one-quarter.

The pipeline of therapies under development has been expanding. The number of molecules in late-stage development totaled 2,891 in 2018, growing 39% over the past five years with oncology medicines increasing by 63% and Next-Generation Biotherapeutics (NGB) including cell, gene and nucleotide therapies more than doubling over the past three years – though they still represent less than 10% of the late-stage pipeline.

Investment in future medical innovations continued to grow in 2018 reflecting confidence in scientific innovation to tackle unmet health needs. Venture capital firms invested over $23 billion in 2018, and the 15 largest pharmaceutical companies recorded more than $100 billion in R&D expenditure for the first time, up 32% over the past five years.

The total number of clinical trials that started in 2018 similarly indicate robust growth in R&D of 9% over the prior year and 35% over the past five years. The average progression time for a drug from beginning of Phase I trials to the end of development has increased by 26% over the past ten years and rose by six months in 2018 to 12.5 years. The composite success rate for clinical development stages from Phase I trials to regulatory submission – based on the percent of drugs successfully progressing to each next stage of development – fell to 11.4% in 2018.  Across therapy areas composite success rates also varied, ranging between 6−15%, with rates for rare diseases and GI/NASH exceeding averages.

A Clinical Development Productivity Index was developed to measure trial success rates in relation to the effort invested in clinical trials. Applying this new metric across trials in nine of the largest therapy areas showed that productivity has fallen 27% overall from 2013 to 2018, heavily influenced by a decrease in Phase I trial productivity of 55%, as well as declines in Phase III since 2016. In Phase I, declines reflect diminishing success of 7% and 6% increases in trial complexity (which includes numbers of trial participants, eligibility criteria, research sites countries, and endpoints).

Eight key trends in technology, science and data use are currently influencing clinical development. Their impact on trial design, complexity, duration and success was explored through the IQVIA Clinical Development Trends Impact Assessment completed by IQVIA therapy area experts. On average across therapy areas, all trends were considered to have a high likelihood of impact, ranging between 74–85% and were expected to reach their peak impact within 2.5–4.0 years. Many of the therapy areas with the most complex trials will see impacts of these trends within three years. GI/NASH, neurology and cardiovascular trials were also deemed most likely to see those changes rapidly, with changes resulting from nearly all trends.

The Clinical Development Trends Impact Assessment was also used to model the future expected impact of each key market trend on clinical development productivity across trial phases and the nine key therapeutic areas. Results show that each trend will have a differential impact on trial productivity, success and effort across therapy areas in the next five years. For example, biomarkers will have the greatest impact on clinical productivity yielding a 34% average increase across therapy areas. Similarly, pools of pre-screened patients will yield a high increase in productivity of 29% on average by driving the largest average declines in effort, at -11%. Trends impacting productivity varied by therapy area. For example, in oncology, pools of pre-screened patients will accelerate trial recruitment and biomarkers will improve success rates, leading to productivity improvements as high as 104% and 71%, respectively.

Of the NASs launched in 2018, 46% were approved based on data from trials with fewer than 500 total subjects 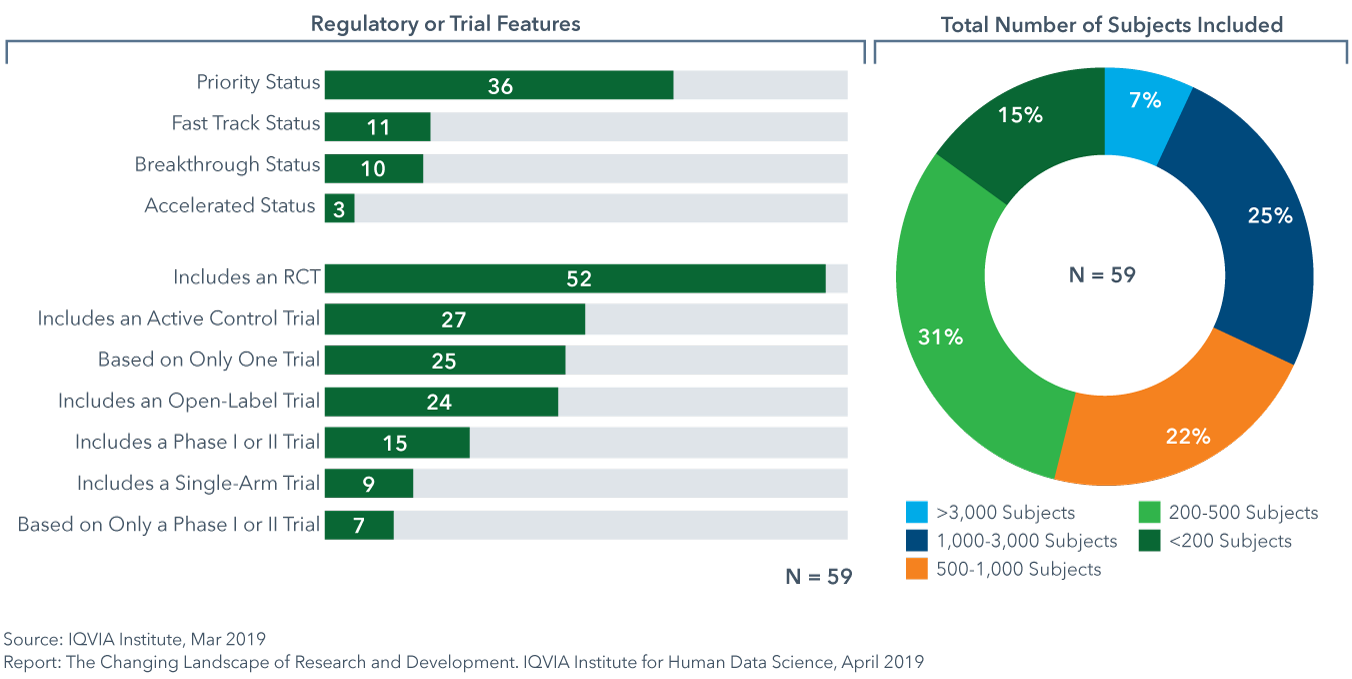 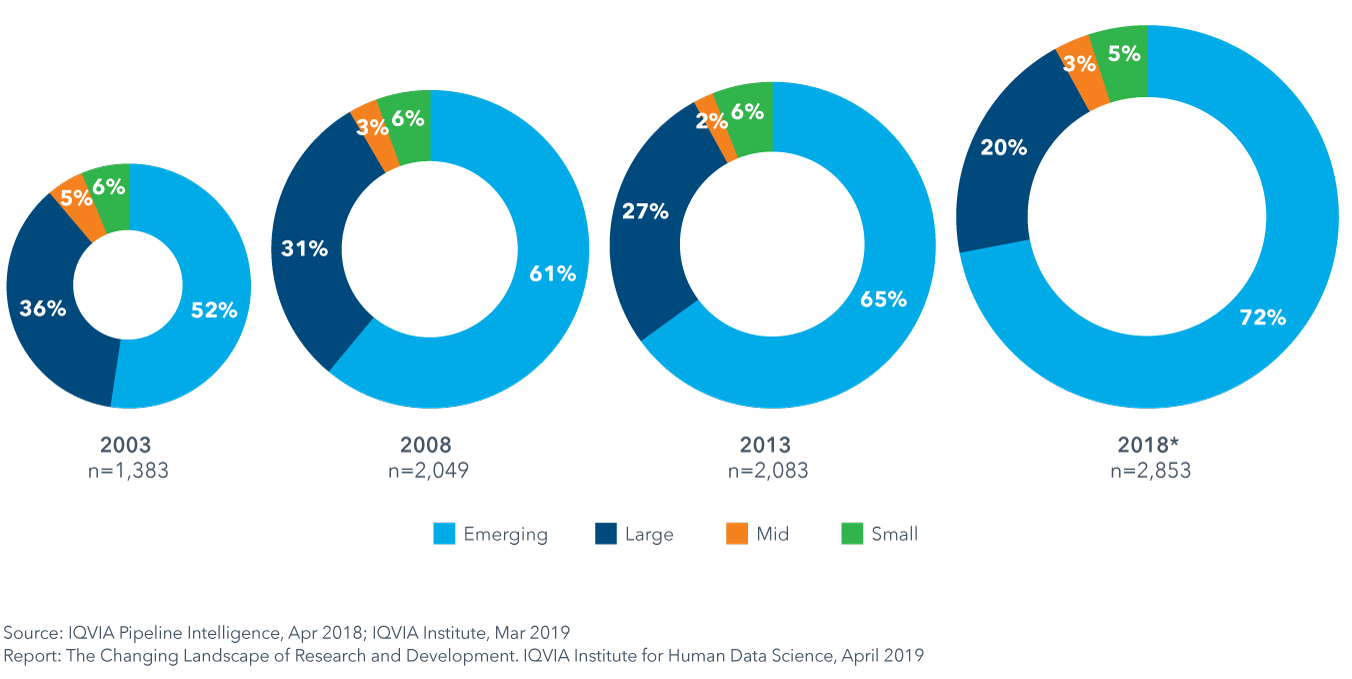 Composite success rates varied by therapy area between 6−15% in 2018, with rates for rare diseases and GI/NASH exceeding averages 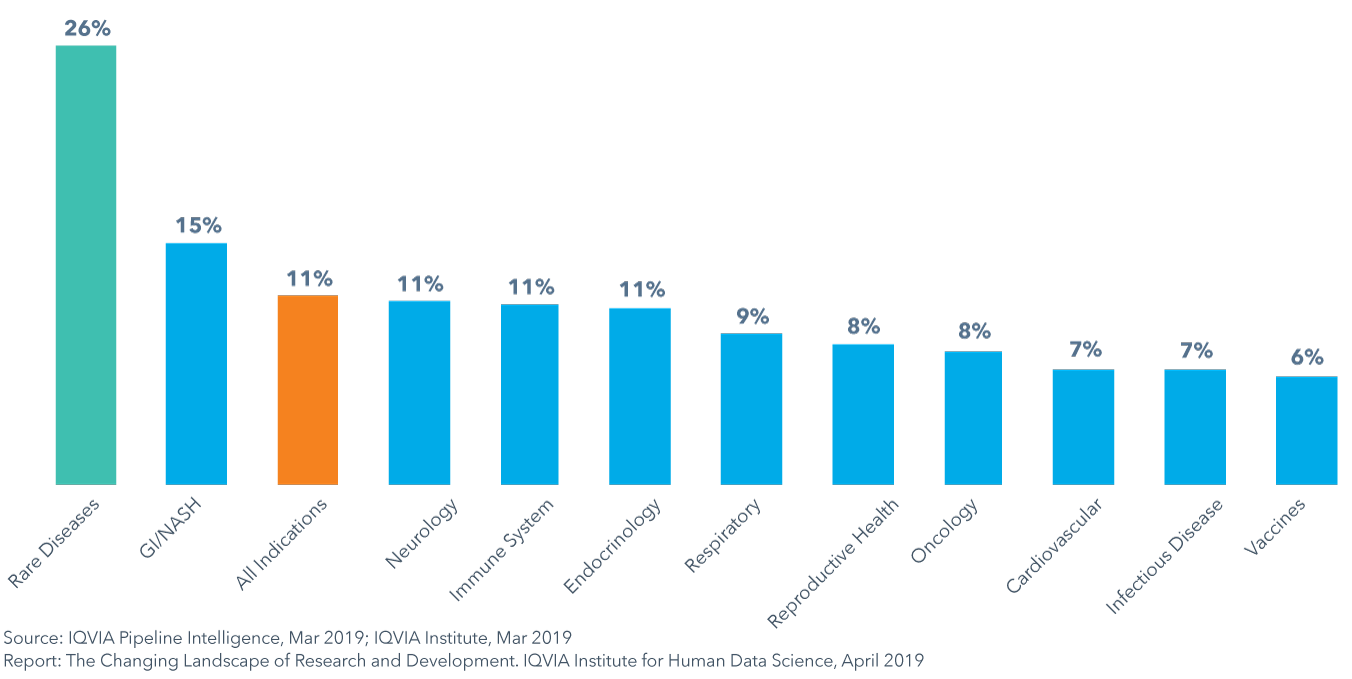 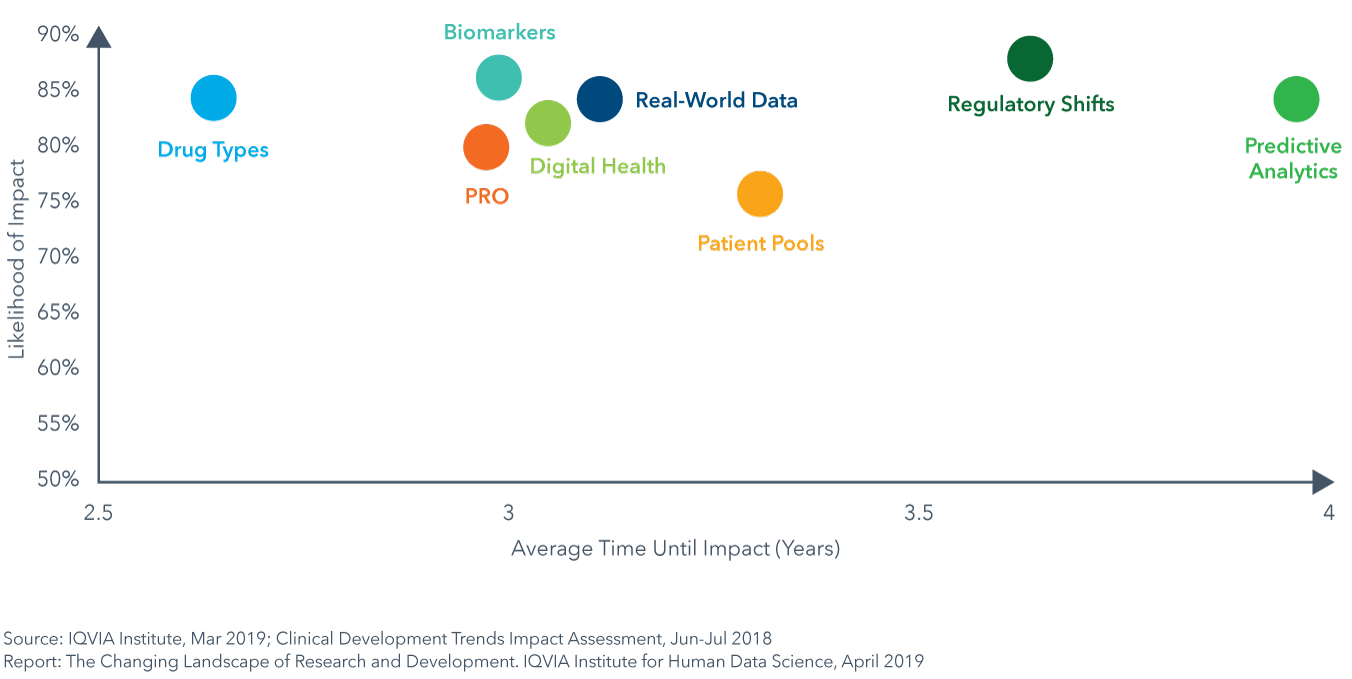 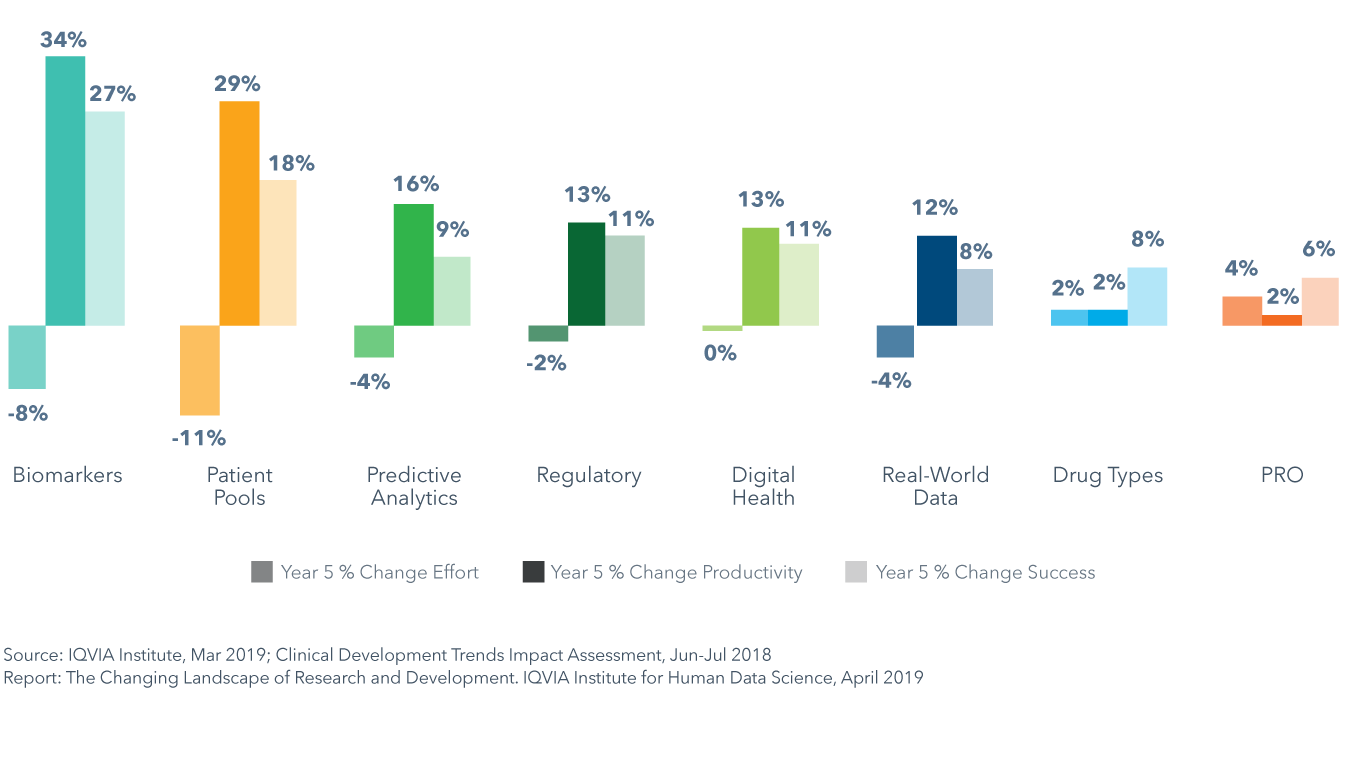