NovaMedica Innotech provides a full range of services on the pharmaceutical industry market: development and pilot production of medicines in accordance with the requirements of the Eurasian Economic Community and GMP.

In 2017 Technological Center received manufacturing license and GMP certificate from the Ministry of Industry and Trade of the Russian Federation. 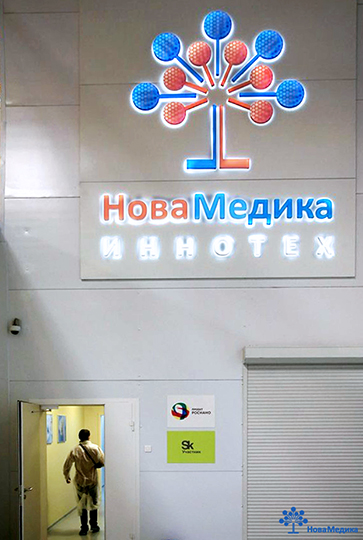 The decision to establish an R&D center was made in June 2015 after the approval by the Board of Directors of Nova Medica of a strategic plan for the period up to 2022 to develop its own innovative drug products.

For the breakthrough development of the R&D business in the company, it was decided to create the Technological Center “NovaMedica Innotech” which consists of a set of R&D laboratories and pilot production with the latest technological capabilities. It was launched in April 2017. The center focuses on the development of innovative dosage forms that allow to change bioavailability and other properties of active ingredients or combine several active ingredients in one form. Due to this, the developed drugs will have new application possibilities, as well as fundamentally surpass many existing drugs in terms of efficacy and safety.

NovaMedica Innotech is an investment project of RUSNANO, as well as a resident of the Skolkovo Innovation Center. Thanks to the support of the Skolkovo Foundation - significant investments, as well as effective cooperation with all its services, divisions and management - the project was launched in an extremely short period of time. It is assumed that the R&D Center will operate not only to solve its own tasks, but also for other Skolkovo residents who are developing new drug products and are forced today to seek help from European and American technological companies.