Home Media Center Video SPIEF2014. Leonid Melamed: Apparently, the one, who shall benefit from the development of public-private partnerships, is the patient

SPIEF2014. Leonid Melamed: Apparently, the one, who shall benefit from the development of public-private partnerships, is the patient 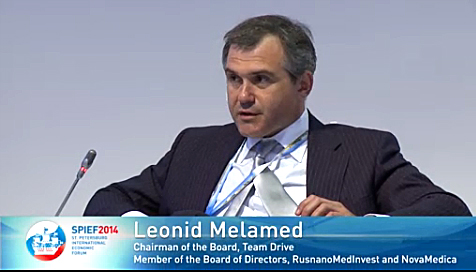 In general terms, engagement of private companies in the healthcare system on a competitive basis shall result in the price optimization and improvement of the quality of medical services provided and pharmaceuticals delivered to patients, Leonid Melamed, Chairman of the Board, Team Drive; Member of the Board of Directors, RusnanoMedInvest and NovaMedica said on Friday at St. Petersburg SPIEF2014.

"Apparently, the one, who shall always benefit from the development of public-private partnerships, is the patient. Private company is focused on an integration of as many patients as possible to bring more investments and profit. This is what distinguishes incentives of a private investor radically from non-profit organizations. At that, the private healthcare tends to be more capital-intensive; this is why expanding public-private partnerships is often associated with more investments, however, considering more efficient results and better quality of services for patients ", – L. Melamed said.

He noted that infrastructural development out of budget funds is a core principle, when building public-private partnerships in the healthcare sector; as a result, based on it the private investors shall financially support projects. In Russia, however, there are some successful projects in place, - the speaker said giving a heads up:

"Private companies launch so called “greenfield” projects for medical institutions or companies-producers of pharmaceutical products to be developed and executed by efforts of private investors from scratch. And there are quite a few projects like that, for instance, there is a project called “Doktor Ryadom” (translator’s note: “Doctor Next Door”), which we support. It is initiated by the Moscow government and includes creation of about hundred Moscow-based private clinics, which gains will be compulsory healthcare insurance, optional medical insurance-based and from contacting patients directly", - L. Melamed told.

"One more example of the high-tech partnership is the project initiated by Pet Technology, the company planning to open about ten pet centers in Russia. First pet center was recently launched in the city of Ufa. They are supported by both private investors and the State Corporation “RUSNANO”. Services will be financially supported out of both Health Insurance Fund and private programs ", - the speaker added.

In his opinion, the number of public-private partnerships is growing not only in the medical care and pharmaceutical industry but also in R&D and regulatory affairs.

"At this level we see the insight and support; there are a lot of special programs, which imply private investors to be engaged in the healthcare system, - the spokesperson said, - "At the federal level, in my opinion, there is a need for an additional interpretation and substantiation of the key targets of public-private partnerships supported by the development of the relative roadmap and identification of specific KPIs."

In his opinion, however, the RF government, President and the Ministry of Healthcare now put more and more emphasis on public-private partnerships development in the healthcare sector. "And therefore there is hope that new and specific targets will be set as well as new tools to achieve them," – the speaker summarized.

At the end of discussion participants shared a wide variety of action-oriented proposals on increasing the role of the private sector in the development of the Russian healthcare.

In L. Melamed’s opinion, to achieve this, we need to concentrate our efforts, first, on the compulsory healthcare insurance pricing considering the actual cost of medical services, the investment component and the rate of return. Besides, he pointed out that any market player, whether a private clinic or a government entity, shall equally and effectively access the compulsory healthcare insurance system.

He also proposed to consider a number of actions directed to further development of the medical insurance.

"It is needed to introduce some risk elements for insurers dealing with the compulsory healthcare insurance, - L. Melamed said, - "In this case they will have incentives to select medical institutions in a reasonable manner, to start competing for patients and to be attentive to the quality of medical services provided ".

He also mentioned that integrating the system of optional medical insurance into the lasting patient-centric activities may have a positive effect. "Now, there is no practice of the medical records sharing unlike the practice of third party only car insurance, when changing insurance companies. When coming to an insurance company, the client is up to a multiple and costly disease therapy in the shortest possible time and the insurer, in turn, wants to him to pay as much as possible. This is why purchasing optional medical insurance certificates is expensive and affordable for the least number of people," – he clarified.

L.Melamed also believes that it is necessary to develop medication insurance within a country.  "Money for medical services and the drug therapy as well as control over the effective use of funds shall be out of a single source. And I strongly believe this must be done by insurance companies", - the speaker emphasized.