The country has a large market for imports, but corruption and new government initiatives could be a hinderance to foreign device makers.

In 2011, Russia had the world’s ninth largest GDP and the highest per capita spending on healthcare of all the BRIC countries.[1] In sheer size, it is the largest of the BRIC countries, covering nine time zones and 17 million square miles. Russia is an upper middle class country with a highly educated workforce and a population of roughly 143 million discerning consumers.[2] 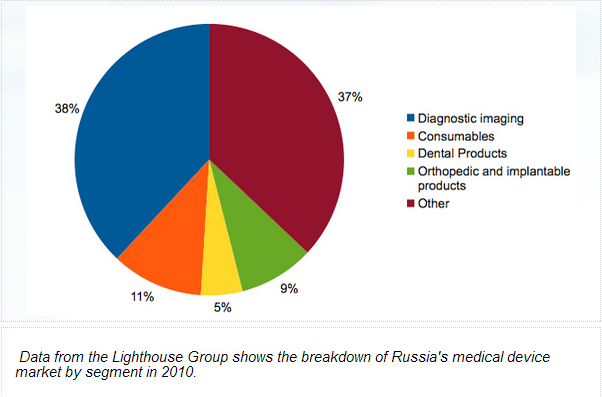 The Russian market for medical equipment and supplies is estimated at $6 billion. This puts the country's healthcare market among the top 20 in the world, although per capita spending remains low by European standards, at around $42.3 About 73% of the market is supplied by imports, with Germany, the United States, Japan, and China the leading suppliers. The value of imports greatly increased until 2008, when the country was hit hard by the global recession. The Russian market, however, remains strongly reliant on products from abroad, as domestic producers are small and undercapitalized.
Regulatory Climate
The Russian healthcare system is divided into national, regional, and municipal levels. The national government controls the budget, policy, and registration of technologies, while regional and municipal governments have control over their facilities and budgets.
Since 1996, the Russian government has provided free healthcare to all its citizens under the Mandatory Medical Insurance Initiative.[5] The national government collects taxes and distributes funds to the regional and municipal levels through Mandatory Health Insurance funds. This covers about two-thirds of the cost of procedures. To make up the difference, Russian citizens also have access to voluntary health insurance and private medical care. This system continues to evolve.
In 2010, the government implemented the Strategy 2020 initiative to attract investment, create jobs, produce safe and effective products, and reduce the country's dependence on foreign healthcare products to a maximum of 50% by 2020.[4]
The Russian health agency responsible for medical devices, Roszdravnadzor, recently published new regulations for medical devices.[6] The regulations took effect January 1, 2013, and have only been published in Russian, so the rest of the world is trying to figure out just what the changes consist of for the industry. However, allegations of bribery by senior officials and the resulting review of past medical device registrations has put new medical device registrations on hold at Roszdravnadzor, furthering the country's image as being opaque and corrupt when it comes to healthcare policies and practices.7
Challenges
The Russian market is full of potential for medical device manufacturers, but it also poses a number of challenges.
Size and Infrastructure. Russia is a large country, but it has a seriously underdeveloped infrastructure that poses significant challenges to market access, particularly outside major cities.
Opportunities