Home Media Center Media about us Import Substitution and Innovations of Kaluga Pharmaceutical Cluster. Results of 2018

Import Substitution and Innovations of Kaluga Pharmaceutical Cluster. Results of 2018

For seven years past from its existence Kaluga Pharmaceutical Cluster has been dynamically developing significantly exceeding the growth rates in other economic sectors of the region. And the question is not only about opening of manufacturing facilities but also about further localization and extension of manufacturing capacity of already existing plants of both Russian and foreign manufacturers. 2018 was no exception. In March of 2018, NovaMedica LLC concluded a special investment contract (SPIC) with the Russian Ministry of Industry and Trade and Kaluga Region. The SPIC provides for building from scratch a plant for sterile injectable dosage forms. As part of the project, NovaMedica LLC will invest more than three billion rubles in establishment of the plant. This project, jointly carried out by NovaMedica LLC and RUSNANO, implies contract manufacture of more than 35 Pfizer medicines.

Expected plant capacity – more than 38.5 million product units (ampoules and vials) a year. Area of industrial and auxiliary buildings and facilities will be about 23,000 square meters. Total manpower will be equal to 250 employees.

In July, in the city of Obninsk in the Kaluga Region, Sanatmetal CIS LLC opened a factory for manufacturing the implants for traumatology, spine surgery, dentistry, veterinary medicine, as well as the prosthetic implants of joints. Sanatmetal CIS is a joint Russian-Hungarian subsidiary of Sanatmetal Kft. which is present in 35 countries in America, Asia, and Europe. Volume of investments in the Kaluga-based factory of Sanatmetal amounted to about 250 million rubles. The facility is scheduled to manufacture 150-180 thousand product units a year (screws, plates, pins, heads, etc.), part of which will be actively exported to Eurasian Union. The factory employs 60 people.

On September 19, 2018, in Grabtsevo Industrial Park, Kaluga Region, was held an official ceremony dedicated to the launch of Novo Nordisk insulin full cycle production (production of finished insulin injection forms with original Novo Nordisk substance) with the total investments amounted to more than 2 billion rubles. NovoRapid®, NovoMix® 30, and Levemir® medicines (included into VED list) are original having no generics registered in the Russian Federation. The project will 100 % supply a need of the Russian Federation for detemir, aspart, and biphasic aspart insulins.

On October 18, 2018, the Government of Kaluga Region and MiraxBio-Pharma JSC signed a cooperation agreement regarding implementation of an investment project on the territory of the Maloyaroslavetsky District – construction of a plant for manufacture of non-sterile medicines and substances intended for treatment of precancerous conditions and preventing cancer of the reproductive system. One of the important activities of the company is development of the medicines for the treatment of precancerous pathologies in females.

On October 31, in Obninsk, Nearmedic Pharma opened a first Russian production facility to manufacture reactants for genetic person’s identification. The new facility will produce components of the tests-systems fully made of Russian raw materials. The application area of manufactured products includes identification of human genetic profile by specific DNA areas, which is highly demanded in crash and crime investigation, genetic studies, forensic examination.

Almost all facilities being part of the cluster actively rump up their output inter alia output of pharmaceuticals under the import substitution program. For example, BION LLC continues its active work on development of both readymade pharmaceutical substances and incoming substances for synthesis. Mir-Pharm group, development strategy of which provides for continuous search for highly-effective medicines, has made major gains. In 2018 alone, the company registered and brought to market three new medicines – Mitotane, Phenazopyridine, and NORMOMED (Inosine Pranobex).

At present at the stages of development and registration are 12 more medicines which will be used in gastroenterology, gynaecology, urology, intensive- care medicine, neurology, and oncology. MAXAR medicine developed by RAS Pacific Institute of Bioorganic Chemistry is manufactured by Obninsk Chemical and Pharmaceutical Company CJSC. This is the only company in the whole world manufacturing this medicine.

Implementation of these projects will enable to significantly increase quantity of the medicines manufactured by the cluster and to reach 50 billion rubles output in terms of manufactured products by 2020. 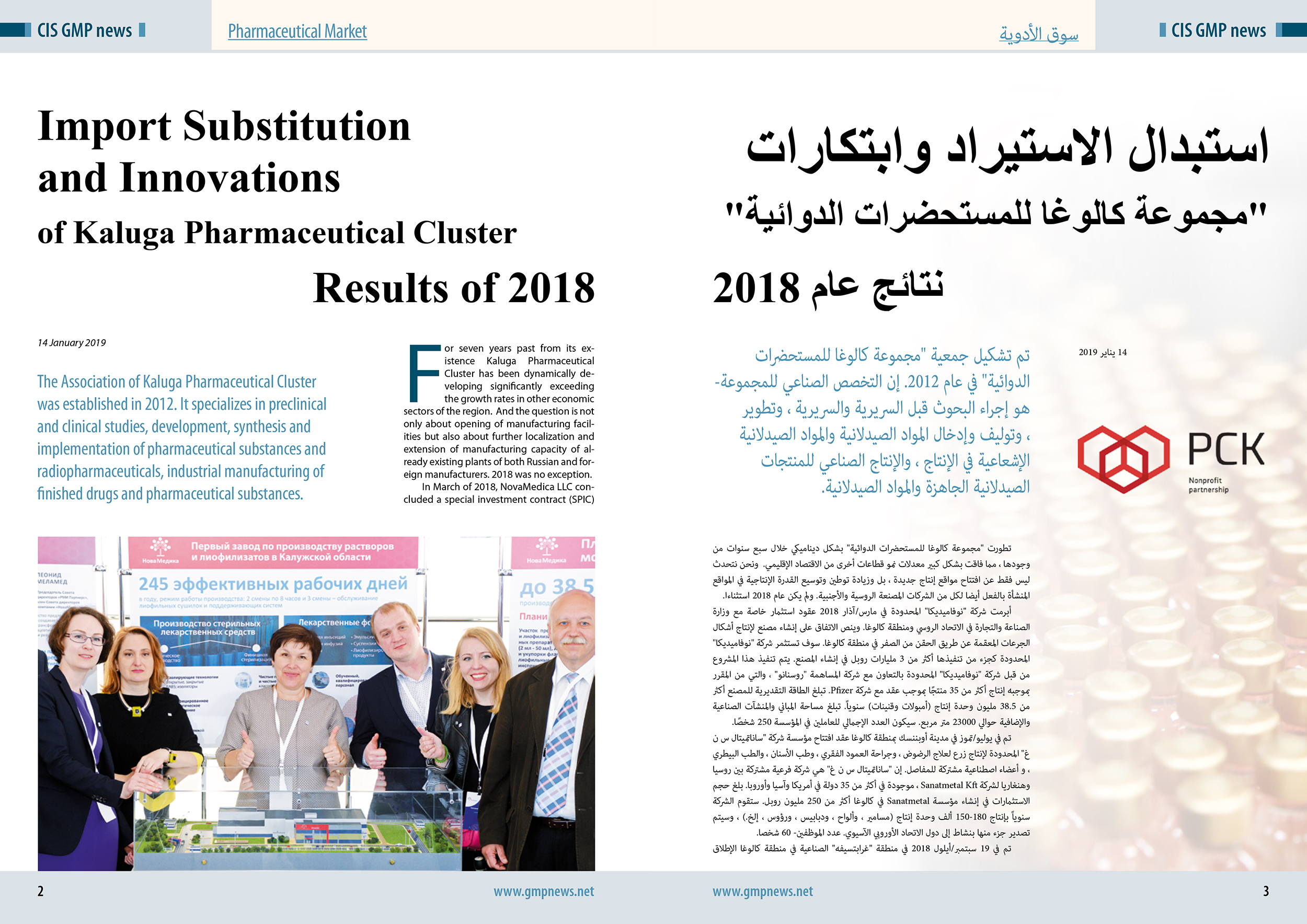 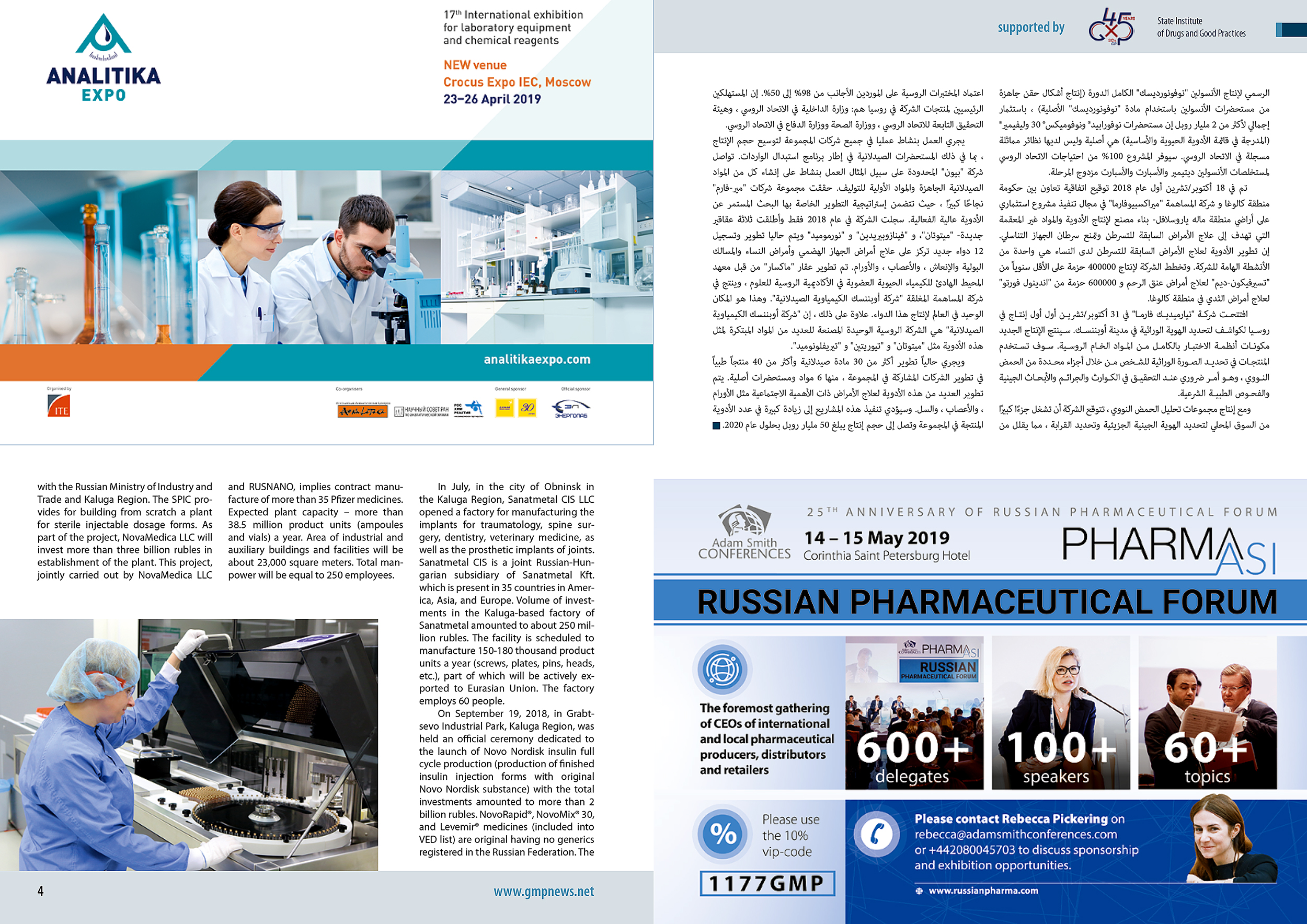 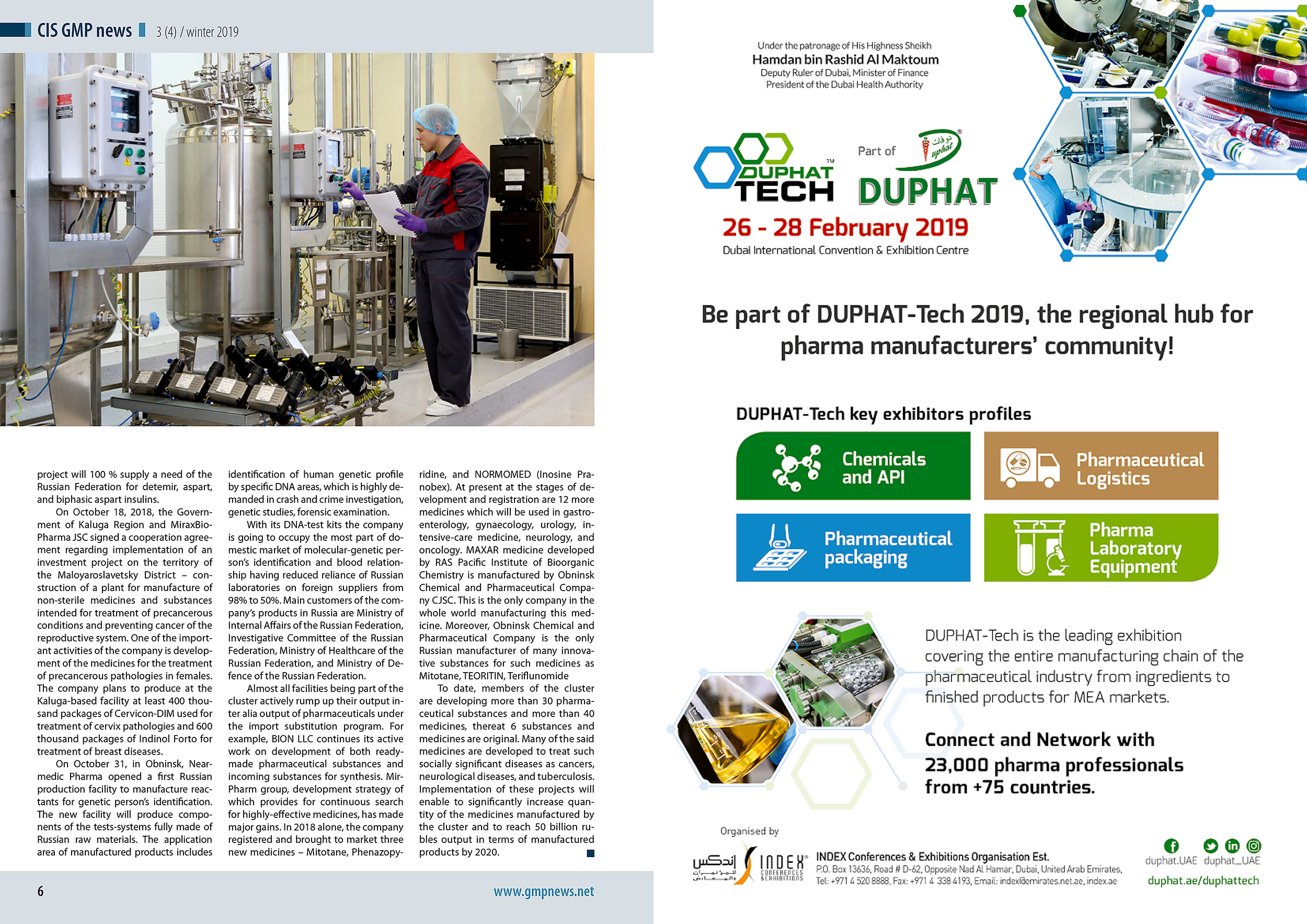