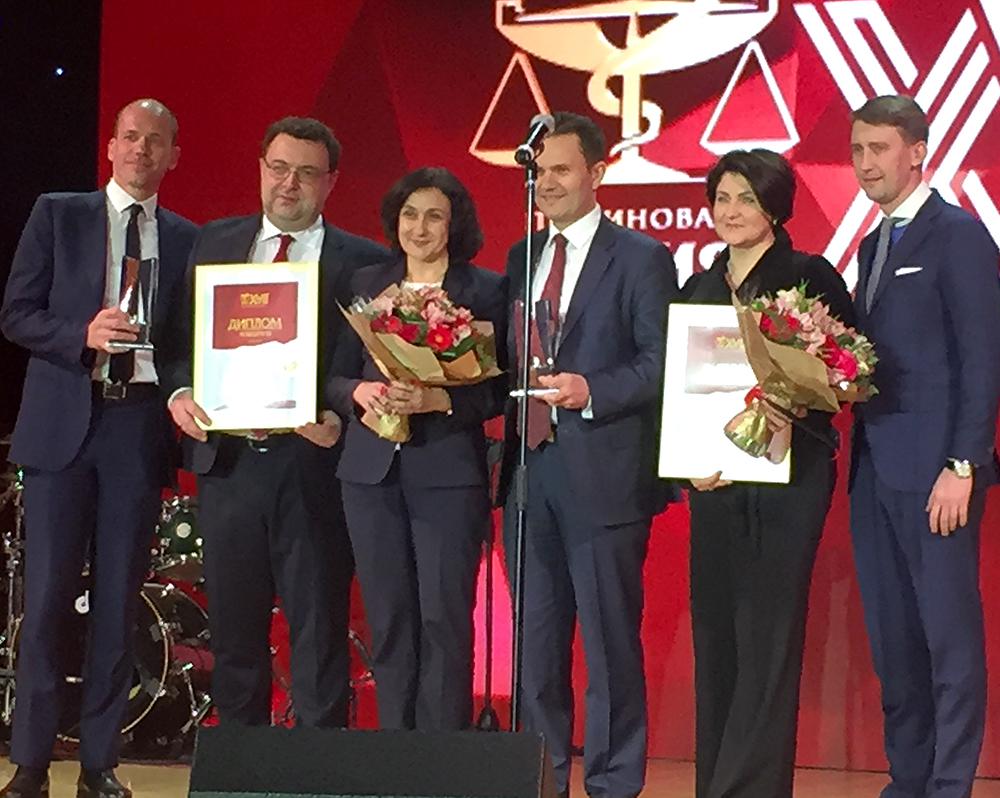 April 21, 2017, Moscow – NovaMedica, Russian pharmaceutical company, and Pfizer, one of the leaders of the world biopharmaceutical industry, were recognized as winners of the open professional contest “Platinum Ounce” in the nomination “Deal of the Year” for the long-term partnership agreement which envisages construction of a high-technology pharmaceutical production facility and localization of more than 30 life-saving and essential drugs in Russia.

During the awarding it was noted that the contest jury chose NovaMedica and Pfizer as winners in this category “for the long-term strategic partnership which will allow to make a significant contribution into health improvement for the Russian patients and into upgrading of the Russian pharmaceutical sector”.

The deal between NovaMedica and Pfizer which was highly appreciated by the market experts who brought both companies into the nominees of the contest and than announced them winners of the contest, is unique for the Russian market. It implies long-term transfer of right and production technologies to NovaMedica for more than 30 drugs from the Pfizer portfolio as well as joint construction of a production facility in the Kaluga region.

The portfolio, which is transferred to NovaMedica for localization in Russia, includes drugs for treatment of serious bacterial and fungal infections, cardiovascular, inflammatory and oncological diseases. Most of these drugs are on the essential drugs list (EDL) and several are also in federal reimbursement programs Population Drug Coverage (ONLS) and in 7 Nosologies (7N). These drugs will be produced at the GMP-plant to be constructed in Vorsino Industrial Park.

«We highly appreciate the recognition of our merits in a professional environment. It is our colleagues who evaluate pluses and minuses of our work and the results more thoroughly than anyone else”, - commented the award Alexander Kuzin, Managing Director of NovaMedica, “For us the experts recognition means strong acknowledgement of the fact that indeed our efforts are significant for the whole Russian pharmaceutical market. This is one more motivation to further develop and keep moving”.

Sofia Kadykova, CEO of Pfizer in Russia, noted: “We are glad that our project together with NovaMedica was recognized by the professional community and received the main award in the pharmaceutical industry. This is our third and as of today the most large-scaled localization project within “More Than” strategy which has been implemented by Pfizer since 2011. This project is a good example of joint work under localization of a large portfolio of products required by the Russian patients”.

More than 100 companies participated in the contest. As in the previous years, the expert board of the award included highly respected representatives from all sectors of the pharmaceutical industry. EY controlled compliance of the voting procedure with the contest rules and regulations. Results of the contest were summed up on April, 20. More than 300 guests gathered at the ceremony of awarding the winners: representatives of the industry community, governmental organizations, leaders of professional associations, journalists.

NovaMedica is a modern Russian pharmaceutical company established in 2012 by Domain Associates LLC, leading U.S. venture capital firm, and RUSNANO, JSC. NovaMedica strategy is aimed at search, registration and localization in Russia of intellectual property rights for innovative pharmaceutical products and technologies as well as at development and implementation of own R&D-projects.

NovaMedica owns intellectual property rights within Russia and the CIS for 36 innovations which are part of the portfolio of RusnanoMedInvest, venture capital foundation. These are drugs for antivirus and anti-inflammatory therapy, to cure ophthalmic diseases and epilepsy as well as innovative technologies to detect oncological and infectious diseases.

NovaMedica also develops a pipeline of its own drug products. R&D Division of the company plans to develop about 15 own drugs by 2022. Five out of them are already on the different stage of development – from creation of a drug formulation up to clinical trials and state registration, and four more are on the stage of launch. These are drugs to cure disease in the sphere of gastroenterology, pain treatment, neurology, ophthalmology and rheumatology.

In April 2017 NovaMedica launched the Technology Center with state-of-the-art technological capabilities which were previously unobtainable in the Russian pharmaceutical industry.

In 2016 NovaMedica became the key partner of Pfizer in Russia. Within the frameworks of this partnership NovaMedica plan to start construction of a pharmaceutical GMP-facility in the Kaluga region in May 2017.

NovaMedica possesses a well-developed infrastructure to market promotion and selling of pharmaceutical products.