Kaluga. July 25, 2013 - The Government of Kaluga Region, the Administrative Board of the City of Kaluga and the pharmaceutical company NovaMedica have signed an agreement on the execution of an investment project to build a new pharmaceutical plant in the region.

The new plant will be built under a joint venture between DRI Holdings Limited, a portfolio company of Domain Associates LLC., a leading American venture capital firm, and RUSNANO, a Russian government-owned investment company.

The agreement envisages the creation of a new high-tech pharmaceutical plant built and operated to GMP standards and U.S. Food and Drug Administration (FDA) specifications in the Grabtsevo technopark (City of Kaluga).

Around $85 million will be invested to build the NovaMedica plant. The land plot where NovaMedica's production facilities will be constructed occupies a total surface area of 50,000 square meters. The plant is expected to generate more than 100 new jobs.

On-site construction is scheduled for the second half of 2013. The factory will focus on manufacturing innovative pharmaceutical products and medical devices, which will be licensed to NovaMedica under the RUSNANO/Domain Associates Agreement and subject to joint financing of late-stage life sciences developments. 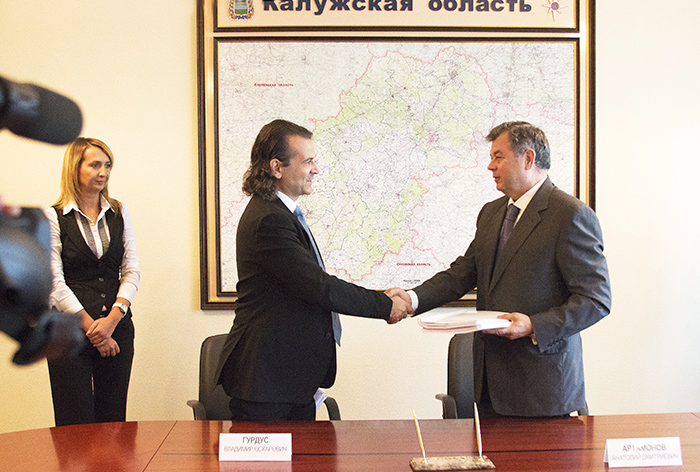 "The decision of NovaMedica to invest in our region dovetails perfectly with our strategy to develop a world-beating pharmaceutical cluster. Concentrations like this will contribute to achieving an important objective set by the Government – to increase the market share in Russia of advanced and innovative medicines produced domestically rather than imported,” said Anatoly Artamonov, Governor of Kaluga region.

“We believe that NovaMedica’s new GMP- and FDA-compliant production facilities will act as a bridge between the researchers and clinicians developing innovative medical products and unmet needs in the Russian market,” said Fabrice Egros, NovaMedica’s COO. “The construction of this facility will bring new and more effective treatments to Russian patients.”

NovaMedica is a Russian pharmaceutical company established in 2012 by DRI Holdings Limited, a portfolio company of Domain Associates LLC, and Russian investment corporation RUSNANO, which implements government policy on the development of hi-tech industries. The company’s strategy is aimed at localizing production of a wide range of new medicines and technologies on the Russian market, including screening and registration, and the creation of innovative GMP-standard manufacturing facilities.  www.novamedica.com

RUSNANO was founded in March 2011 as an open joint stock company through the reorganization of state corporation Russian Corporation of Nanotechnologies. RUSNANO's mission is to develop the Russian nanotechnology industry through co-investment in nanotechnology projects with substantial economic potential or social benefit. The Government of the Russian Federation owns 100 percent of the shares in RUSNANO. Anatoly Chubais is CEO and chairman of the Executive Board of RUSNANO. www.rusnano.com

Domain Associates, LLC founded in 1985, is a venture capital firm with an exclusive focus on investing in life science companies that advance human health. With more than $2.7 billion in capital raised, Domain invests in three major segments: pharmaceuticals, diagnostics, and medical devices. The partners of Domain have a total of more than 270 person-years of experience among them in the healthcare and venture capital industries and have been involved in the formation and growth of more than 250 life sciences companies. Domain has offices in Princeton, N.J. and San Diego. www.domainvc.com