Emerging biopharma (EBP) is a segment of companies driving a large portion of innovation and development in the life sciences. EBP companies are defined as having less than $200 million in estimated annual spending on R&D, or under $500 million in global revenue. EBP’s encompass 3,212 companies in 2018 and account for 73% of late-stage research, up from 52% in 2003, and the number of molecules under development by EBPs grew by 15% in each of the past two years.

EBPs increasingly contribute to innovation, and these companies were the original patentees for 29 of the current top 100 drugs, which account for 40% of sales in the United States in 2018. For drugs launched in 2018, EBPs originated and launched 42% of the new drugs, up from 26% in 2017. EBP- originated products generally reach the market faster if they were acquired and launched by other company segments, and the median time for EBP companies to launch new drugs was 16.6 years in 2018, over 30% slower than other company segments.

Partnering between EBPs and larger companies accounted for nine of the top ten partnering deals in 2018, and emerging biopharma companies were involved in seven of the top ten M&A deals in 2018. There was also a 78% increase in deals at pre-registration stage, or 62 deals compared with 36 in 2017. Large pharma continues to acquire or license assets between themselves and with EBPs, and in 2018, among 45 companies assessed, 415 deals were transacted for an aggregate disclosed value of $272 billion.

There were 168 startups which received series A funding in 2008, and ten years later these companies have achieved a variety of outcomes, providing a useful benchmark on performance for startups which have received funding more recently. Of these, 51% of companies were privately held and 17% had gone public. Of those 28 publicly-traded companies, five now have market capitalization of over $1 billion dollars.

Over the next five years, EBPs engaged in R&D and commercialization will face a changing environment and need to adapt accordingly. The use of biomarkers in clinical trials will have the greatest impact on EBP clinical development productivity, yielding a 34% increase on average, and pools of pre-screened, which aid in trial recruitment, will lead to an average increase in productivity of 29%. In the next five to ten years, three key attributes will be important for EBPs to embrace to assure their success: the use of data and analytics, the adoption of technology and a critical need to employ flexible business models. 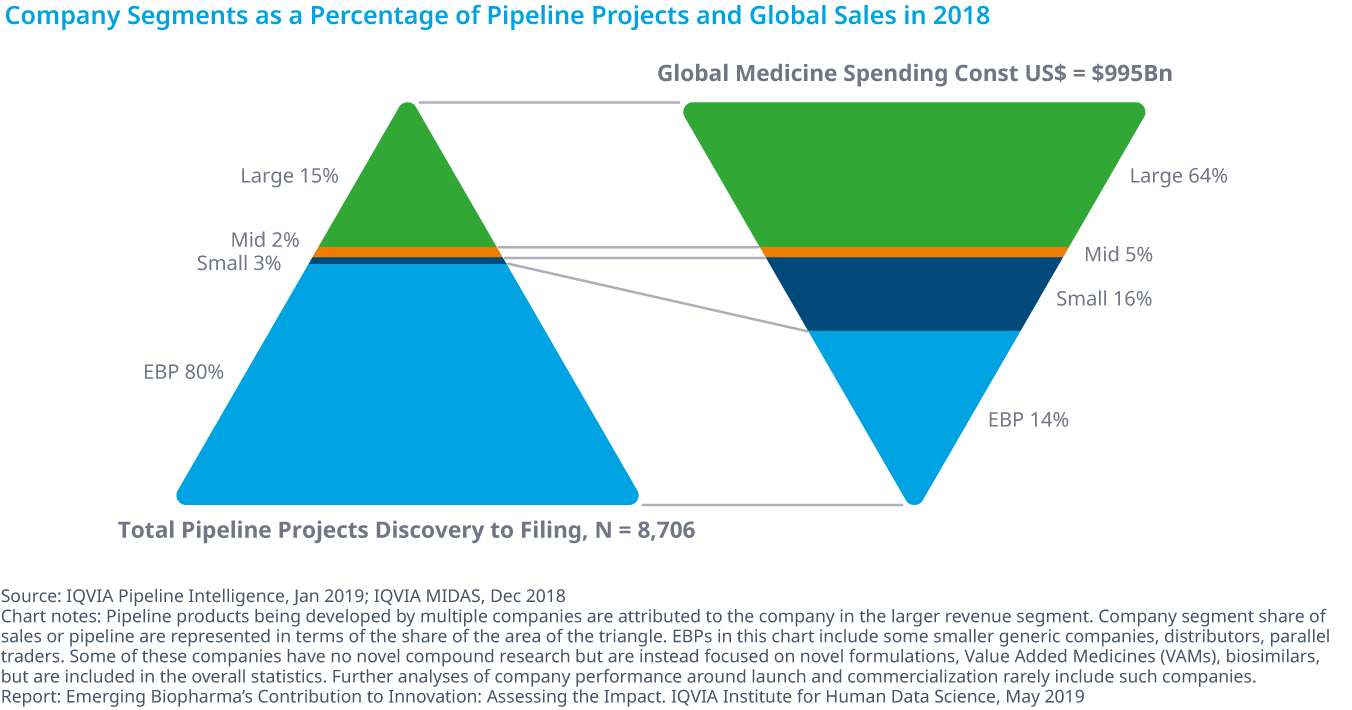 Emerging biopharma companies originated and launched 42% of new drugs 2018, a higher percentage than in past years and up from 26% in 2017 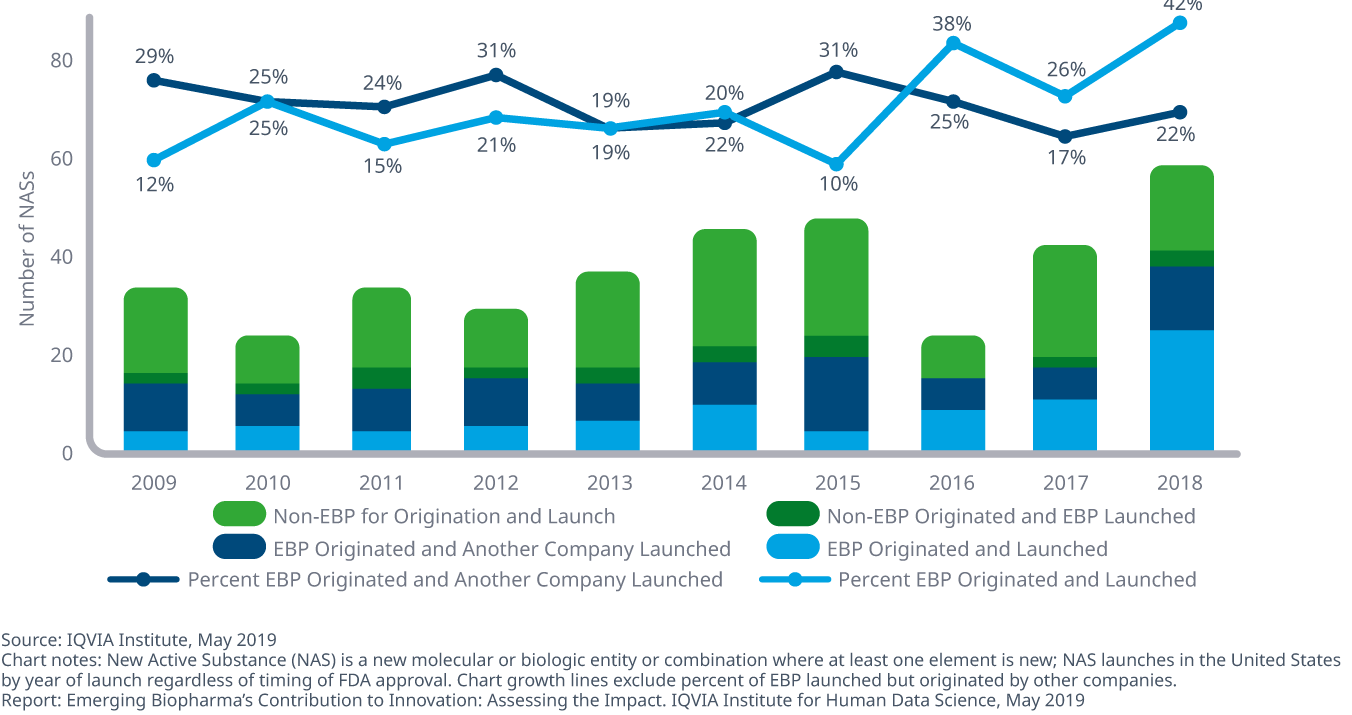 Startups received funding in 2008 across a range of therapy areas and at varied funding levels, with half occurring in three U.S. states 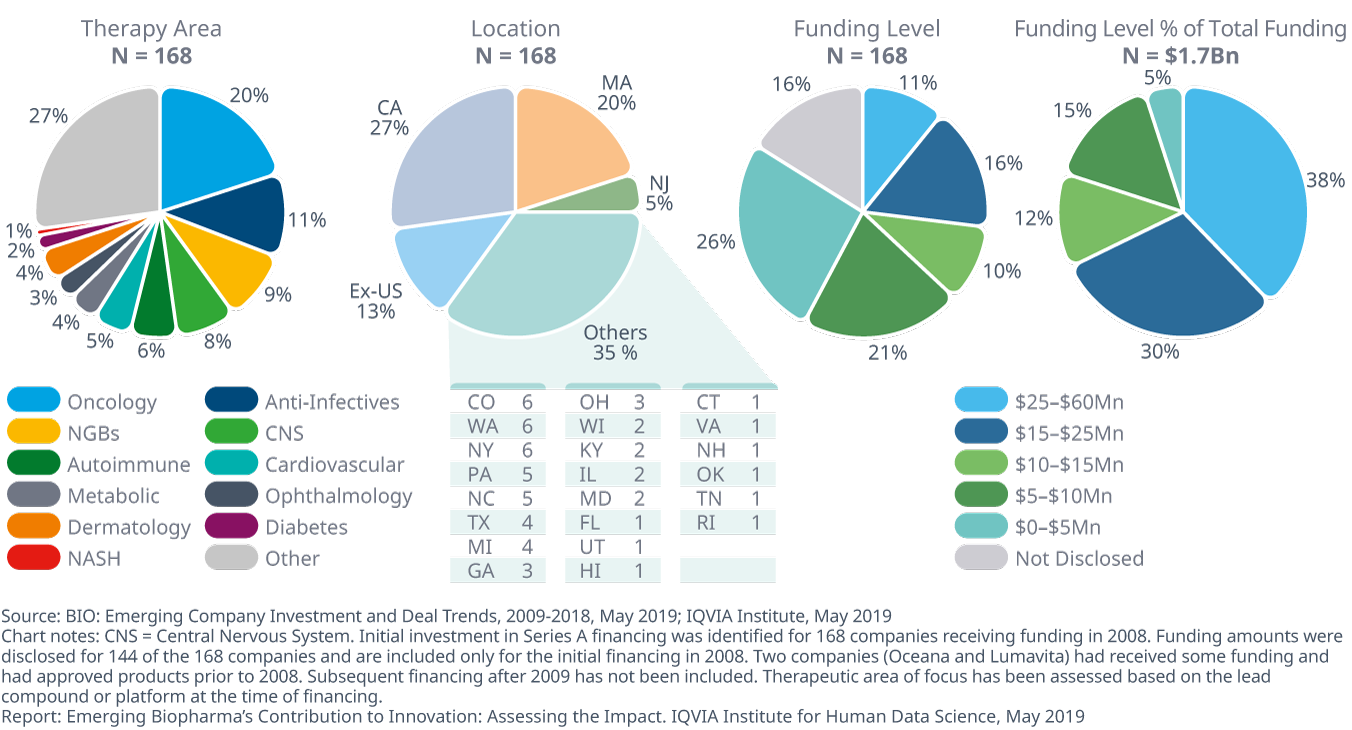 Since the initial financing, 51% of companies are still privately held, 7% have closed and 26% have been acquired