Russia has the right prescription for pharma companies

The recent social unrest in Russia has been pervasive and well publicised, resurrecting the western typecast of Russia as a risky place to do business. Even veteran international investors, who should know better, have grown bearish about binding their profits to Russia. This would be a mistake.

The country still has enormous potential and is one of the few growing markets in what is a predominantly barren global economy. There is good cause for foreign businesses in Russia to be optimistic, not least in pharmaceuticals.

The country’s recent entry into the World Trade Organisation should prove a catalyst for Russia’s industrial modernisation. An extra $49bn of GDP a year, and more importantly an international stamp of approval, signal that Russia is not only open for business, but is on the fast track to global financial and economic integration.

The Russian government’s plan to double GDP within 10 years is not unrealistic. After a sharp downturn in 2009, the economy has rebounded, experiencing two years of 4 per cent growth. Russia’s economy is clearly back on track.

With its population of over 140m growing again after years of decline, Russia has an economy increasingly driven by consumer spending, thanks to a rising middle class, with an overwhelming appetite for quality goods and services. This works to the advantage of those companies with high-end brands that are willing and able to meet the shift in demand caused by this changing demographic.

But what does this mean for medicines? Demand for healthcare is also rising. While the average life expectancy for men has increased 11 per cent in the last decade, it remains low: 63, compared to Russian women: 75, and both lag far behind their Western counterparts. 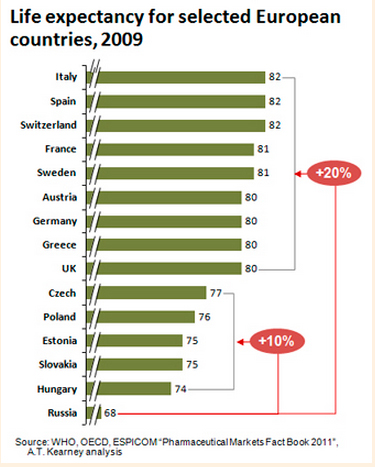 Despite an appetite for better healthcare, driven by a rapidly expanding wealthy middle-class, the country faces a looming health crisis with high levels of unmet need. For example, fewer than 6% of the estimated 70 million people with hypercholesterolemia (high cholesterol) in Russia are receiving treatment, whereas in the UK, 19% of the estimated 37 million with raised cholesterol receive treatment.

National expenditure on healthcare, currently standing at 5.4 per cent of GDP, lags behind European counterparts, Spain (9.5 per cent), Germany (11.6 per cent) and the UK (9.8 per cent). Russia also significantly underspends on medicines for its wealth compared to other countries.
However, the desire of the Russian government and the demand from its citizens to address unmet healthcare needs will sustain growth and improve health provision for patients over the long term. The government has (quite rightly) made improving healthcare a strategic priority. It remains firmly on course to almost double healthcare spending in the next five years. 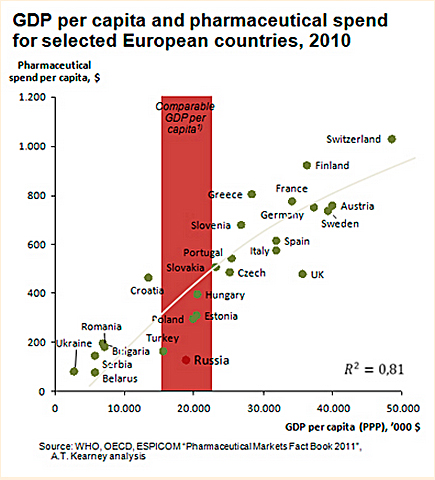 Drug reimbursement coverage will also be expanded, meaning that more patients will receive access to better treatments. The wider health and pharmaceutical sector is forecast to grow faster in Russia than anywhere else in Central and Eastern Europe in 2012.
AstraZeneca has invested in Russia to ensure that patients get access to our medicines. In 2011, we were the first pharmaceuticals multinational to announce an investment in full-cycle manufacturing. The factory, currently being built and due to open in the Kaluga region in 2014, will manufacture a range of AstraZeneca’s drugs.
We’re also committed to sharing our global R&D expertise with the Russian scientific community through research collaborations, support programmes, and clinical trials. We opened our first Predictive Science Center in Russia in St. Petersburg earlier this year, working with local scientific talent and focused on developing bioinformatics, data analysis methods, software and systems to better predict the safety and efficacy of potential new medicines.
And this week we announced a major agreement with the V.A. Almazov Federal Heart, Blood and Endocrinology Center – a leading research institute and treatment centre for cardiovascular and endocrine disease – and the Russian Venture Company BioFund – a fund aimed at biopharma companies and service companies to the biotech, pharmaceutical and medical industries.
The collaboration will see the launch of Russia’s first biobank aimed at better understanding some of the diseases that are public health priorities such as cardiovascular diseases and diabetes.
Overall, AstraZeneca’s total contribution to the Russian economy will see over $1.2bn invested over the next five years from 2011, because we want Russian patients to have access to our portfolio of life-saving prescription medicines.
While Russia presents very real challenges to the international investor, the country’s overall economic and fiscal outlook is surprisingly robust. The last decade has seen good GDP growth, and for health-related businesses in particular the opportunity remains exciting. Recent years have seen significant investment in infrastructure and education, coupled with extremely low sovereign and household debt. Russia is a less risky market than critics may wish to believe. Especially given current challenges within the eurozone, there has never been a more important time to look to Russia.