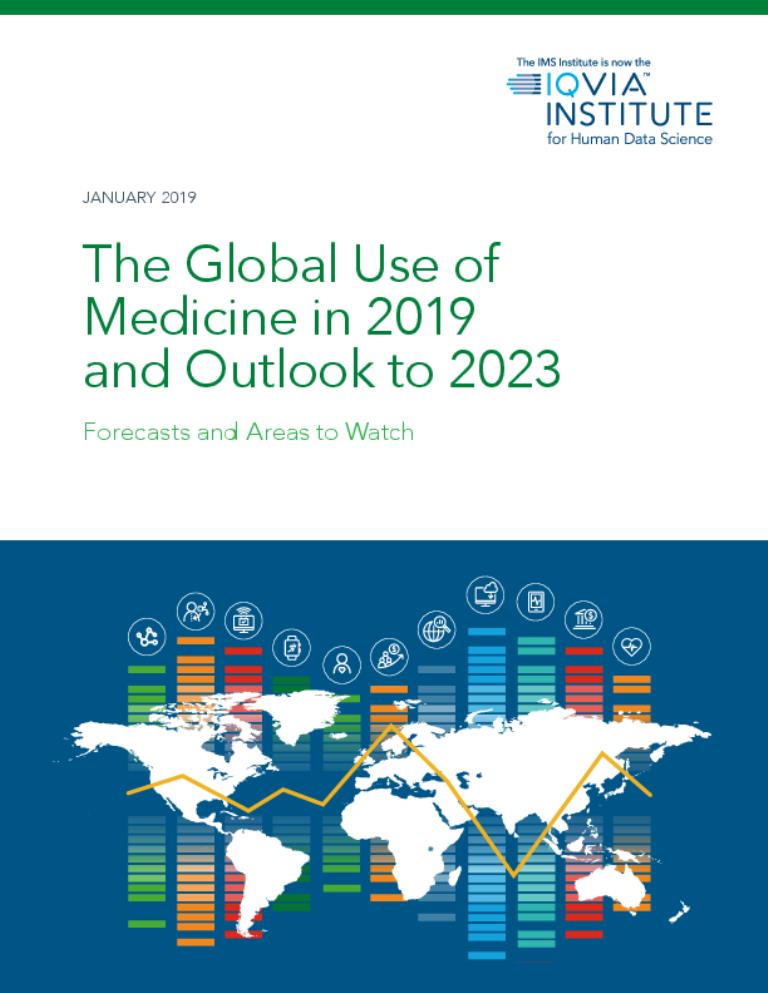 The global outlook for medicine use and spending affects the prospects of life sciences companies, insurers and the health of populations around the world. This report includes the latest predictions for the global pharmaceutical market along with geographic, therapy area and channel perspectives. It assesses the impact of new drug launches, biosimilars, and growth in the use of specialty medicines. The report also highlights ten areas to watch over the next several years that impact the use of and cost of medicines including: prescription digital health tools, artificial intelligence and machine learning, Next-Generation Biotherapeutics and use of real-world evidence in clinical development.

The global pharmaceutical market will exceed $1.5 trillion by 2023 growing at a 3−6% compound annual growth rate over the next five years. The key drivers of growth will continue to be the United States and pharmerging markets with 4−7% and 5–8% compound annual growth, respectively. In the United States, overall spending growth is driven by a range of factors including new product uptake and brand pricing, while it is offset by patent expiries and generics. Medicine spending in Japan totaled $86 billion in 2018, however spending on medicines is expected to decline by -3 to 0% through 2023, largely because of exchange rates and the continued uptake of generics. In Europe, cost-containment measures and less growth from new products contribute to slower growth of 1−4%, compared to the 4.7% compound annual growth seen over the past five years. Pharmaceutical spending in China reached $137 billion in 2018 and is expected to reach $140−170 billion by 2023, but its growth is likely to slow to 3−6%.

New products and losses of exclusivity will continue to drive similar dynamics across developed markets, while product mix will continue to shift to specialty and orphan products. An average of 54 new active substance (NAS) launches per year are expected over the next five years and two-thirds of launches will be specialty products, lifting specialty share of spending to near 50% by 2023 in most developed markets. At the same time, the impact of losses of exclusivity in developed markets is expected to be $121 billion between 2019 and 2023, with 80% of this impact, or $95 billion, in the United States. By 2023, biosimilar competition in the biologics market will be nearly three-times larger than it is today. This will result in approximately $160 billion in lower spending over the next five years than it would have if biosimilars did not enter the market.

In addition to these market forecasts, there are several areas to watch. These include:

In the United States, the median list price for oncology and orphan drugs could potentially reach above $200,000 per year by 2023 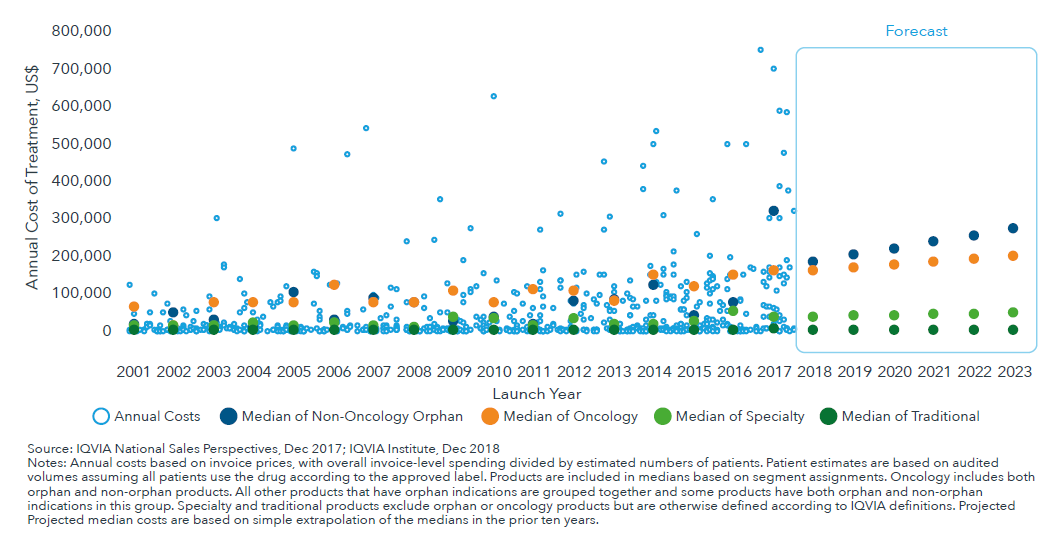 In the past two years, a range of companies made commitments to reduce list price increases for branded medicines, which are now below 6% per year on average

Biosimilar dynamics will be driven in the near-term by molecules that are already facing competition and may see new competitors, while key introductions of new biosimilars in 2023 will impact in the longer-term