The pharmaceutical market in Russia - current status, trends and changes

During his speech at BioForum 2013 in Budapest, Artur Shigabutdinov, from the Russian company Nadim Cro, characterized the pharmaceutical sector in Russia. He stressed the important role of generic drugs in the development of the pharmaceutical sector in the country, listed the factors stimulating development of the sector, as well as those that slow it down and talked about the changes in Russian legislation that reflect on the performance of the sector.

‘Nowadays Russia and Russian government are aware of the fact that we are less developed in the field of biotechnology and medicine in general. That is why many grants are devoted for industry in order to support our domestic companies and make them competitive, at least at the Russian market.’ - says Artur Shigabutdinov.

What helps in development?

In the opinion of Mr. Shigabutdinov, at this time one can see a clear trend in Russia to harmonize the national law to the one currently in force in the European Union, and the creation of protective measures for local producers.

According to Artur Shigabutdinov: ‘The main drivers of the currently accelerated development of Russian pharmaceutical sector are: aging population in the European part of the country, a growing number of people in the Asian part, the change of INNs for the new ones and increase in disposable income of the population.’

What hinders the development?

The factors limiting the current development of the pharmaceutical sector in Russia are, according to the speaker: constantly changing legal principles, unpredictable business environment and the fact that all major decisions have to be approved personally by both the Prime Minister and the President of the country. 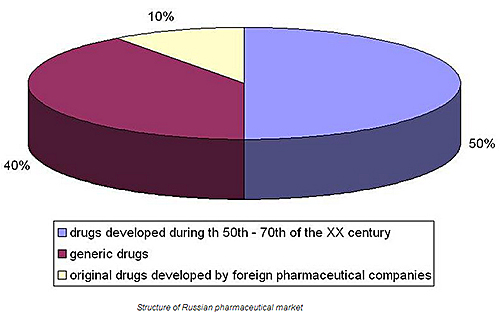 ‘At the moment, there are not too many original drugs that were developed in Russia, but there are some at the stage of development. Obviously we manufacture in Russia a lot of generic drugs that are equivalents to popular pharmaceutics, such as diclofenac, ibuprofen, or clarithromycin. We produce also different biosimilars: insulin, epotein beta, or somatotropin.’ - says Artur Shigabutdinov.

The changes in Russian legislation

Artur Shigabutdinov: ‘Due to changes in the existing legislation, which took place in 2010 and is called Federal Law ‘On Circulation of Medicines’, there are plenty of technical changes. Some of the rules concerning the procedures and requirements for registration of drugs were changed. Most drastic change was the introduction of the law, stating that all new pharmaceuticals entering the Russian market need to be supported with clinical data obtained in Russia. In practice, this meant that the companies not carrying out any clinical trials in Russia were unable to obtain registration. (...) In addition, there are also new requirements for conducting clinical trials themselves and the requirement of state control over prices of products listed in the list of Vital and Most Essential Drugs - it includes most important drugs available on the market.’

Effects of changes and current situation

According to data complied by the experts involved in the analysis of the pharmaceutical market n Russia. in the period between January 2010 and January 2011, the size of the market increased by 12%. This growth rate is poorer result if we compare it to results from before the crisis (20-25% annually), but it positively stands out from the global market (5-7%). The increase in sales of packaged pharmaceuticals and medical goods is much more modest ‑ only 1%. This reflects the general trend observed in 2011 ‑ a decrease in sales of low-cost medicines and an increase in sales of the expensive ones.