Home Media Center Media about us Focusing on the journey, not the destination, however, taking the whole winner’s stand, is the Russia’s hallmark - Facbrice Egros

Focusing on the journey, not the destination, however, taking the whole winner’s stand, is the Russia’s hallmark - Facbrice Egros

When proposed to work in Russia, Fabrice Egros, an experienced businessman with an extensive track record in European, American and Japanese pharmaceutical markets, said “NO” first. Now Egros admits that the problem was residing not in the creation of the company from scratch – he has done it many times in the past – but daunting development prospects of the pharmaceutical sector in a country, which seemed "exotic".

However, two years ago to be American of French extraction moved to Moscow together with his family and as NovaMedica’s COO became one of those, who actively participated in creation and development of this company.

Egros is a reputable person in the western professional community;  in Russia, however, he was practically unknown, as a matter of fact, he has never communicated to the Russian media. But for Pharmatsevtichesky Vestnik – Pharmaceutical Bulletin he made an exception. NovaMedica’s leader told Oksana Baranova, Pharmatsevtichesky Vestnik – Pharmaceutical Bulletin correspondent, about how the expats visualize and estimate prospects of the Russian pharmaceutical market. 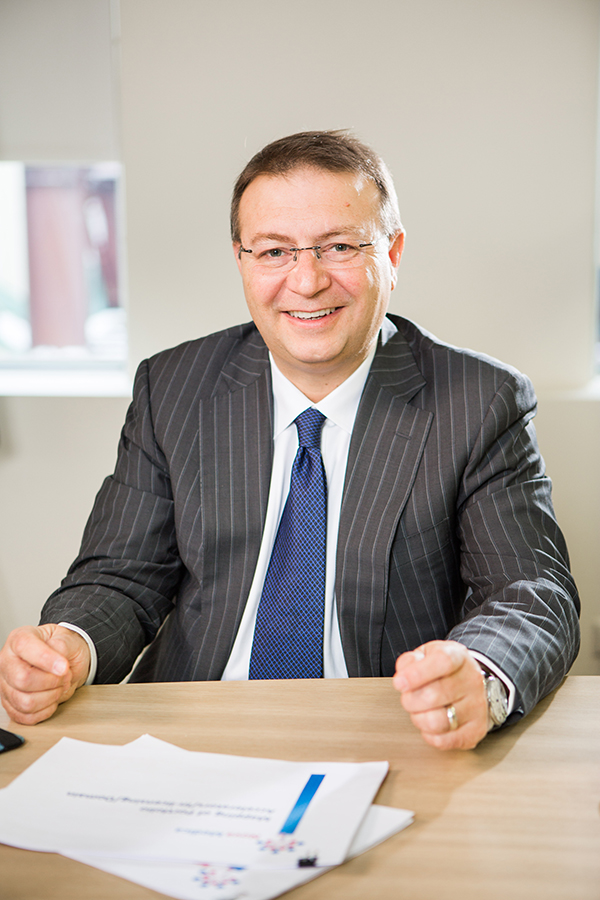 Anyway, why did you say no, when you were first proposed to work in Russia two years ago?

- Frankly speaking, I had no idea of changing my opinion by the time I said no. Japan, where I spent several years, seemed the most exotic place to work back then. While in Japan, I was part of the development and promotion of an antiepileptic drug. I consider this as one of my personal solid gains. At present, this drug has achieved its peak sales in Europe, the USA and Japen. Apparently, I always enjoyed being part of large international projects. When I was proposed to Russia for work, first thing I questioned myself was, what do I know about it? Perhaps, that it is associated with BRIC. So, my thoughts were that I would rather agree to Brazil, where it is warmer at least.

Joking apart, understanding of the Russian pharmaceutical market is as yet poor in the West. Of course, there are well known pharmaceutical companies in Russia like R-Pharm, Biocad, Pharmstandard, however almost unknown globally. Historically, most Big Pharma companies are headquartered in Europe, Japan and the USA. Being a toddler still, I am humbled not only to see the Russian pharmaceutical market growing and emerging but also to contribute. I believe it is one of the reasons I finally ended up with an idea of joining this perspective team. On the other hand, excitement  and drive of the Russian partners, especially Leonid Melamed, speaking about the project simply made my choice, so I agreed.

It is impossible not to ask you a question that is, apparently, being addressed to all the managers of international projects. NovaMedica is a joint Russian-American project. Due to latest developments between our countries did you feel any impact on your work?

Politics are politics and business is business. I am sure that common sense always wins at the end of the day. Besides, economic factors also pay a key role in any politics. This project is not short-term. It anticipates a long-term strategy, which has been carefully reviewed and approved by both Russian and American stakeholders. It is being implemented. We feel no impact on either ends. We are still in close contact with stakeholders and partners. I believe that the most important thing is to work in a professional manner, to confirm the quality and efficacy of any steps and decisions you take and make, no matter what is happening on the political arena.

To a greater extent, medical and pharmaceutical industry is not just business, it is about people’ health. This field is above and beyond any political and military interests and its products are always highly demanded no matter what and in any country whatsoever.

Much emphasis is now on changes the Russian pharmaceutical industry is experiencing. Could you forecast, what to expect and where Russian pharma will be globally in ten years from now?

I agree with experts, who forecast Russia to be ranked 8-9 globally in terms of the pharma market volume by 2016. Just a year ago Russia was not even in top-10. In three years from now it may come in eight. The Russian market is growing. Moreover, a new generation, to which, I hope, you and I may be referenced too, care much more about health and as a result, requires for healthcare will increase. Patients are becoming more educated and learn how to treat the disease at early and not at late stages. They also take seriously concept of prevention.

Let’s look at the ophthalmology market: Russia – 335 MM euro, growth - 14% a year. Italy – 500 MM euro and drop of 5% a year. Trends are clear: Russian pharma market is it grows and approaches the level of one of the "BIG 5" European countries.

It is known that the current spending on healthcare in Russia is about 3% GDP. For comparison: Germany – 9%, USA – 16%. I strongly believe that the situation will change in Russia and 5% is quite an achievable target.

Are there any specifics of the Russian healthcare?

When comparing Russia with other countries, the number of infectious, cardiovascular, CNS and GI diseases is historically higher here. It is a serious problem. In my opinion, one of the reasons is an inadequate attention to preventive care and as a result, the drug market to prevent these diseases is immature.

What is the reason for that: Are the Russian patients more scatterbrained than foreigners?

No, it is a comprehensive problem: more emphasis shall be put on the disease prevention in Russia; it must be addressed by pharmaceutical companies, physicians and patients. All patients shall be enrolled in different disease awareness programs organized and performed properly not only by physicians but also by pharmaceutical companies and by government.

Another trend is vice versa. Russia takes leading positions against the global market in some areas of the medical industry. For instance, Russian ophthalmology is ahead of the global market on the number of available innovative solutions. S. Fedorov Eye Microsurgery Complex is the best known and affluent institute in the world. Now the Institute is our partner and while in preparation of our collaboration and closer contact with the Russian ophthalmologists, I noticed that despite of the global leadership they are striving for more innovations! It is worthy of emulation.

You have faced with the need to feel confident about the legislation environment of different countries. What surprised you first when you had started working in Russia?

The regulatory specifics of the Russian pharmaceutical market are very similar to Japan. In Russia, just like in Japan, according to the Russian Ministry of Health’s obligations, domestic clinical trials shall be conducted in addition for all EMA and FDA approved drugs. The goal is obvious – getting a 100% safe end product for patients with certain national and population specifics. While in Japan, one of my tasks was to identify differences between FDA, EMA and national regulatory systems and to suggest options for harmonization. We have studied this issue very thoroughly and concluded that harmonization procedures may be simplified if focused on coordination of preclinical trials to comply with unified system requirements and adapted to ICH regulatory standards on drugs (International Conference on Harmonization – PV note). A relative cooperation agreement is exist between EU, USA and Japan. In Russia just a few people know about this mechanism of international cooperation but I am confident that Russia will appreciate its importance and sign on; this will expedite the admission of reviews of Non-Clinical trials for researchers and entrepreneurs and will accelerate the emergence of new drugs to markets of different countries. In terms of the specifics of the Russian pharmaceutical market I would point out the regulatory process of obtaining all necessary permits and approvals for drugs before the market entry. In Russia this process is comprehensive, but long.

Are two years enough for a foreigner to understand, whether it is difficult to do business in Russia?

In terms of cooperation I did not notice any particular differences between global and Russian partners.  Building mutually beneficial cooperation relationships is globally important and Russians are no exception. However, they are more straightforward. This is a compliment. I have to delineate, however, that working in Russia is not easy but I feel blessed with this assignment.

Is your family travelling with you? What did they feel about moving to Russia?

We live in New York. When I told my wife and son about a new assignment, they said: “Why not?”. But most of all, my mom, who lives in France, made my day, when told: “Moscow is closer to Paris than New York”. So we ended up here. I have to admit that stereotypes about Russia are still very strong. First, we came to Moscow to sightsee and know a bit more about the country. On return to New York my friends and colleagues asked me weird questions like: Do Russians wear hats with earflaps with stars, do they drink vodka all the time and heat the engine with a torch to start it in the winter. By the way, my thought back then was, it would be very nice to improve and develop further the tourism infrastructure in Russia. My family and I liked Moscow very much, we realized that we could live and work here. By the way, there are no bears on the streets of Moscow.

Besides the business, did you get a chance to travel across Russia to know the cultural aspect of the country?

Unfortunately, I don't have a possibility for often travels. But I had a chance to travel to St. Pete and Sochi. And I took part in the closing ceremony of Winter Olympics in Sochi. While there, I understood what will be the future of Russia. They said “for us is important to have the Olympics at a proper level, so we will be satisfied standing fifth”… Eventually, Russia came in first. Winning is important for Russia and is its lineaments.

If someday you feel like writing a book about adventures of a foreign businessman in Russia, what will be the title of it?

It depends on the purpose. For promotion purposes I would call it “From Russia with Love” and outside Russia there is a chance this book may be a bestseller. If writing it for myself, the title will be “Children of Sochi”, because Russia for me will always connote with a “wish to win”, no matter what.